Here is a picture of a disk drive and a floppy disk. To save on a floppy disk you must write: SAVE"FILE NAME",8. To understand this command we need to take it apart. First of all, the quotation marks are there because the "file name" is a string. (I will talk about strings later on.) The ,8 is there because the disk drive's device number is called 8. Different devices have different numbers. 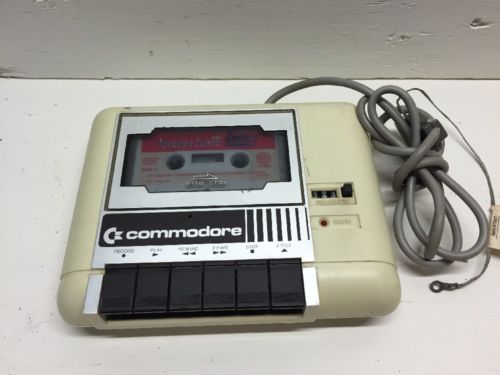 Next is a picture of a cassette and a tape drive. When saving to a cassette you need to write: SAVE"FILE NAME". In this command you may notice there is no number at the end. This is because the computer's default is to save to a cassette. (If you want, you can write ,1 at the end because the tape device number is 1.)

To load a specific file from a disk you write: LOAD"FILE NAME",8. If you just want to see everything that is saved on the disk, write: LOAD"$",8. The $ is the file name of the disk's directory. If you run this command the computer will say READY but will not show any saved files. To see the files write LIST.

To load from a cassette you just type LOAD (remember: the computer's default is to use the tape drive.) After typing LOAD the computer will say PRESS PLAY ON TAPE. Then you need to press play. The tape drive will load whatever is the next file on the tape.